Check Your Insoles Regularly And Replace When Necessary

About two and a half years ago I bought a new pair of "walking about" shoes. My walking about shoes are for everyday use. Going to the store, walking the dogs, walking to the library (which is a path less traveled these days). This particular pair though were going to do double duty as I was going to Scotland for my parent’s fiftieth wedding anniversary. The shoes needed to be comfortable and deep enough for me to put a pair of our Pedors 3P Inserts in them but also they need to be smart enough to meet the approval of my mother’s critical eye. We were staying at a fancy hotel after all.

The shoes I bought were a pair of brown Clarks. Clarks was the go-to brand for school shoes when I was growing up in the UK (they probably still are) and they are brand I have long admired. I was reading the other day that they are the fourth largest shoe manufacturer in the world and are even number one for smart/casual footwear.  Impressive.

In keeping with the plan my new shoes got a new pair of 3P inserts (which I sneaked out of the warehouse, don't tell) and off I went walking about. Some thirty or so months later one of the laces snapped and so I decided to replace them. While doing this I gave the shoes a once over to see if there were any odd wear patterns, signs of fatigue or stitching coming apart. I’m pleased to say that they looked worn but not too shabby.

My 3P Insoles however looked a little worse for wear.

So what about my insoles? Well here they are. Thirty months of me (6ft 4 and 220lbs) pounding on them (almost) everyday. 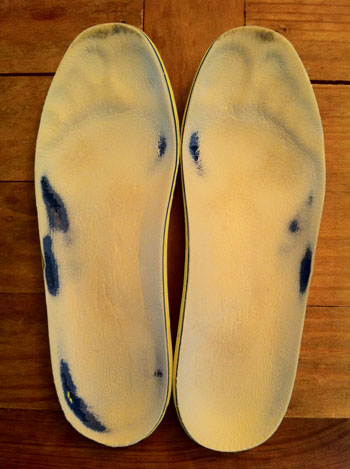 What is interesting is that I have some problems with my right knee/hip/lower back and you can quite clearly see how that leads me to favor putting some extra weight on my left side as I ignore the heel strike on my right side and plant most of my weight on the ball of my foot – which in turn has worn away the top layer of polyethylene – the comfort layer. The blue poron (rebound) is starting to show through but the general shape of the inserts is fantastic. They may look a little beaten up but for what they have gone through, I couldn’t be more proud of the product.

And the new ones I put in last week feel wonderful!

Best wishes to you all,